Samantha was in love with her coworker Duncan when they worked together at the same school. Years later, with Samantha now working as a school librarian in Texas, the two are reunited, but Duncan is no longer the happy, carefree teacher he used to be. This love story is sad but also uplifting, and in these times I appreciated the message that one character shares with another: spread joy whenever you can.

The story’s message, that people should choose joy even (and especially) in difficult and painful times, seems tailor-made for this moment. A timely, uplifting read about finding joy in the midst of tragedy, filled with quirky characters and comforting warmth.–Kirkus (starred review)

“What You Wish For is a bona fide explosion of happiness packaged in book form. A compassionate story of grief and resilience, What You Wish For is also a vital reminder that joy is not just something that happens to us but also something we have the power to choose… Center has created for her readers a quirky confection that celebrates life in all its imperfect glory and delivers a much-needed dose of optimism.” — Bookpage 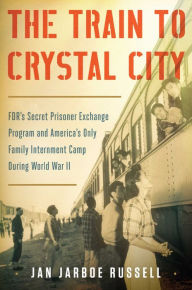 Combining big-picture World War II history with a little-known event in American history that has long been kept quiet, The Train to Crystal City reveals the war-time hysteria against the Japanese and Germans in America, the secrets of FDR’s tactics to rescue high-profile POWs in Germany and Japan, and how the definition of American citizenship changed under the pressure of war.

The author humanizes the harrowing experience by following the lives of two young women who were American citizens, and their families, all of whom were herded into the hot and isolated Crystal City camp on the Texas border with Mexico.

“This is an informative, disturbing, and necessary reminder of the dangers produced by wartime hysteria.” (Booklist)

“Both scholars and generalreaders interested in World War II will agree, this book is a gripping storyfrom start to finish.” (Library Journal)