Sixteen minutes after take-off on a foggy night from Martha’s Vineyard airport, a private jet plummets to the ocean.  Only a down-on–his-luck artist and a 4 year old boy (now the sole inheritor of immense wealth from his mogul media father’s empire)  manage to swim to safety.  “Who? and why?” scream to be answered.  A suspense thriller at its best.

“From the Emmy, PEN, Peabody, Critics’ Choice, and Golden Globe Award-winning creator of the TV show Fargo comes the thriller of the year, 2016.”

“This is one of the year’s best suspense novels, a mesmerizing, surprise-jammed mystery that works purely on its own, character-driven terms….Mr. Hawley has made it very, very easy to race through his book in a state of breathless suspense.”―Janet Maslin, New York Times

“In the hands of a writer like Noah Hawley, who knows how to build tension from mundane moments, it is a remarkable thriller that most readers will find difficult to put down…it moves toward a breathless ending.”―The Washington Times 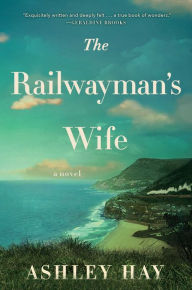 A tale of hope and heartache set in post World War II Australia that explores life and grief and the randomness of tragedy.  Not only does the author explore the intersecting lives of the four main characters, but Ashley Hay also creates remarkable sensory details for the reader to savor and experience – the astonishing views, tastes and smells of the Australian seaside town of Thirroul, as well as the clamor and clack of the railway cars through the town and the surrounding countryside.

“Multilayered, graceful, couched in poetry, supremely honest, gentle yet jarring, Hay’s thought-provoking novels pulls you along slowly, like a deep river that is deceptively calm but full of hidden rapids.  Much to ponder.”  Kirkus Reviews

“Exquisitely written and deeply felt, The Railwayman’s Wife is limpid and deep as the rock pools on the coastline beloved by this book’s characters and just as teeming with vibrant life. Ashley Hay’s novel of love and pain is a true book of wonders.” -Geraldine Brooks, Pulitzer Prize-winning author of The Secret Chord 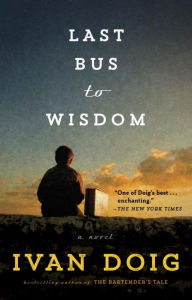 Storytelling at its best!  Sent alone by his grandmother in the Montana Rockies to her sister in faraway Manitowoc, Wisconsin ride the “dog bus” with 11 year old Donal and then back again.  One rollicking misadventure after another, a host of memorable characters, the backdrop of 1951 America’s West guarantee a humorous, most enjoyable read  – the last book from a most gifted contemporary writer.

“One of Doig’s best novels…enchanting … It’s warming to think that in his final months [he] shared the writing hours with one of his greatest characters: a version of his younger self wound up and set spinning on the long zigzag adventure called life in the American West.” –The New York Times Book Review

“Last Bus to Wisdom is a treasure; one suspects that the beloved Ivan Doig–a red-haired boy who lived with his grandmother and grew up to tell stories–chuckled as he plotted to leave his readers a part of himself.” –Shelf Awareness (starred)

“[T]he true successor to the dean of Western writers, Wallace Stegner…Last Bus to Wisdom is a rambunctious adventure packed with color, vitality and characters worth rooting for… a masterful fusion of picaresque exploits and ripping yarns.” –The San Francisco Chronicle

The author himself is an architect. He has chosen a time in history – Vichy France, 1942 – where his main character, the gifted Lucien Bernard, will be put to the test.  Desperate for income, Lucien says yes to the Germans for the opportunity of his career to design a building despite it being a munitions factory. But then, his wealthy French benefactor asks him to risk his life to design invisible spaces to hide Jews. The architect’s decisions alter his very being.  An extra plus: an interview with the author as well as a Reading Group Guide are included.

“A beautiful and elegant account of an ordinary man’s unexpected and reluctant descent into heroism during the second world war.” –Malcolm Gladwell

A thrilling debut novel of World War II Paris, from an author who’s been called “an up and coming Ken Follett.” (Booklist)

Here is a humorous but gut-wrenching novel about an independent woman’s struggle to become pregnant while coming to terms with her own adoptive and biological parents. Why does it take some of us half a lifetime to come of age?

“In her debut novel, screenwriter, playwright, and film producer Barone uses a wide lens to capture Cheri Matzner’s life, from a precarious beginning to a confident, peaceful middle age… Cinematic in its scope, this novel takes readers on a broad, deep, and poignant journey alongside a tough, admirable woman and the varied characters who populate her life.”―Kirkus

“Cheri Maztner is interesting company…Barone has a background in writing for screen and stage, and knows how to propel a story at an engaging clip. Indeed, the pace and structure of this novel suggest a movie-in-waiting.”
―New York Times Book Review