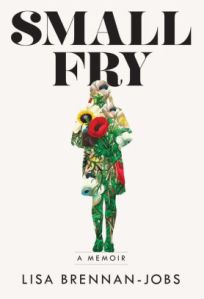 A tender coming of age story about a young girl trying to reconcile two very different lifestyles between her mother and father….. who just happens to be Steve Jobs.   This is not a celebrity biography.  She is true to her young voice throughout plus you will fall in love with her snapshots of 1970’s-80’s northern California.

“Entrancing… Brennan-Jobs is a deeply gifted writer… Her inner landscape is depicted in such exquisitely granular detail that it feels as if no one else could have possibly written it. Indeed, it has that defining aspect of a literary work: the stamp of a singular sensibility… Beautiful, literary, and devastating.”―New York Times Book Review

“Brennan-Jobs skillfully relays her past without judgement… staying true to her younger self. It is a testament to her fine writing and journalistic approach that her memoir never turns maudlin or gossipy. Rather than a celebrity biography, this is Brennan-Jobs’s authentic story of growing up in two very different environments, neither of which felt quite like home.”―Booklist (starred review)

“Brennan-Jobs’s narrative is tinged with awe, yearning, and disappointment… Bringing the reader into the heart of the child who admired Jobs’s genius, craved his love, and feared his unpredictability.”―Publishers Weekly (starred review)