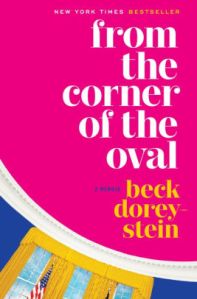 While this is written by a former stenographer in the Obama administration, politics don’t play that large a role in the book. Instead, this memoir is primarily about a young woman navigating life after graduating college, trying to find a career path in Washington, and falling in love. There are a lot of fun stories about working for the president (such as getting to fly on Air Force One) balanced with relationship heartbreak and the author’s dreams of becoming a writer.

“[Dorey-Stein] writes with wit and self-deprecating humor but is fully aware, too, of the pomposity and petty spite of official Washington. She’s at her best and funniest when recalling the physically unhealthy and vaguely ridiculous work of following the president wherever he goes.”—The Wall Street Journal

“History lesson meets soap opera. In this poignant, brutally honest, and often-funny work of self-reflection, Dorey-Stein pulls no punches and tells all she learned from and about the president who ‘taught me to look up.’”—Booklist