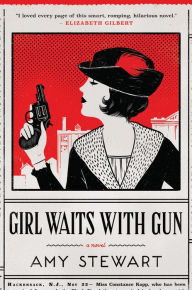 I thoroughly enjoyed this work of historical fiction set in the early 1900’s about three sisters pursuing justice after a local bully crashes his motor car into their buggy and refuses to pay damages.  I sincerely hope Amy Stewart writes a sequel – one book about the Kopp sisters is not enough – it’s a feminist romp and a complete hoot!

“Constance Kopp, the feisty heroine of Amy Stewart’s charming novel “Girl Waits With Gun,” sounds like the creation of a master crime writer. At nearly 6 feet tall, Constance is a formidable character who can pack heat, deliver a zinger and catch a criminal without missing a beat. Based on the little-known story of the real Constance Kopp, one of America’s first female deputy sheriffs, the novel is an entertaining and enlightening story of how far one woman will go to protect her family.” —Washington Post

“Stewart has spun a fine, historically astute novel…The sisters’ personalities flower under Stewart’s pen, contributing happy notes of comedy to a terrifying situation…And then there is Constance: Sequestered for years in the country and cowed by life, she develops believably into a woman who comes into herself, discovering powers long smothered under shame and resignation. I, for one, would like to see her return to wield them again in further installments.”—New York Times Book Review