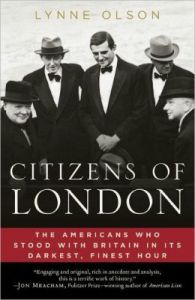 Lynne Olson focuses on three extraordinary Americans who were in London from 1939-1945, Edward R. Morrow, the broadcast journalist, John Gilbert Winant, the American ambassador to Great Britain, and Averell Harriman, a confidante of both Franklin D. Roosevelt and Winston Churchill. Their relationships with each other and others, including Pamela Churchill, the prime minister’s daughter-in-law and Tommy Hitchcock, a wealthy bon-vivant who flew fighter planes, changed the course of history. The author brings war-torn London alive in a fascinating way! This book was a great hit with Weston’s new Non-Fiction Book Discussion Group.